Sophie was an original ballet for the Royal Opera House, commissioned by ROH2 and based on Styron's novel, with choreography by Cathy Marston and video by Terry Braun.

A collaboration between choreographer, film-maker, designer, composer and dancers, Sophie was an original work based on William Styron’s novel Sophie’s Choice was programmed to coincide with the premiere by The Royal Opera of Nicholas Maw’s Sophie’s Choice. Essentially a portrait of Sophie, the ballet exists in the moment of her final choice – between life and death – and allows fragmented images from her past to swim around her as she makes this last decision. Terry Braun’s projections melt in and out of live action combining filmed dance and live dance to striking effect, drawing parallels between the characters Sophie encounters, questioning the truth behind the stories she tells.

Terry directed, shot, edited and oversaw the presentation of the videos for Sophie. They were scripted and devised in collaboration with the choreographer Cathy Marston.

The video extract is a mock up of three of the screens used on stage for Sophie. On stage at the Linbury the two large screens left and right are back projected and the middle screen is front projected. NB during the performance, all three screens flew (elevated) from their lowest to their highest position - which you can simulated see in this video.

One of Terry's key creative contributions to Sophie was through his ideas for the integration of the different screens into the look and space and time of the performance. This meant that the individual films were not shot to be edited in the traditional wide/medium/close structure of most television and film. There was no single screen that presented all of the action, dance or information. Instead, the audience was asked to take in the multiple screens in a similar way to how the audience saw the dancers.

It was important to accurately mock up the position and synchronization of the three videos and their screens for rehearsals, so Terry prepared digital mock-ups the entire show using After Effects. On stage each video source was projected separately, with individual video sources from four synchronized video players.

This scene shows Sophie walking fearfully up the stairs to the office of Herr Hoss, the Commandant of Auschwitz, where Sophie worked as an interpreter and typist. 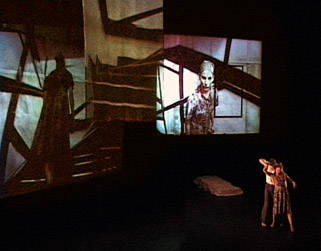 Antonia Franceschi and Karl Sullivan perform live with three other projected versions of the Sophie character.

Antonia Franceschi dances the role of Sophie with three other projected versions of the character.