The DARK was a haptic experience set in the 18th century, when Britain had a thriving shipping industry and created vast profits from the slave trade.

The DARK used ghosts and 'ghostliness' as metaphors - for both the dark and hidden aspects of our past, as well as for the difficulty that we experience when we need to respond to things that we can hear, but cannot see.

The DARK existed in two forms - experiential as a touring installation and online as a web audio experience.

The installation took place in a completely dark space that groups of up to fifteen people could enter and experience simultaneously. Using a 20.4 surround system, visitors were immersed into an emotionally charged story taking place on a slaveship and were encouraged to follow the point of view of the characters by physically following the character’s voice in the darkness - an unnerving and hyper stimulating experience.

The DARK experience - the combination of being in a completely dark space, a highly immersive 3D sound environment and being engaged in a very emotional story - resulted in a wide range of responses in visitors. Some could ‘see’ the structure of the ship through the sonic architecture created by 3D sound, some hallucinated random visualisations, some laughed and some cried and everything in between!

The DARK online is a surround sound experience, listened to through headphones with navigation via arrow keys and other keyboard shortcuts to further control your passage through the story.

The ghosts of The DARK are based on the following real people and events from the 18th century:

The DARK was a Braunarts production, funded by the DCMS project, Culture Online. The DARK toured 7 locations across the UK. A further round of financial support from the Heritage Lottery Fund enabled The DARK to tour new locations in the UK as ‘Dark Heritage’ with a rich portfolio of educational and participatory opportunities.

Ghosts and 'ghostliness' are used as metaphors for both the dark and hidden aspects of our past. 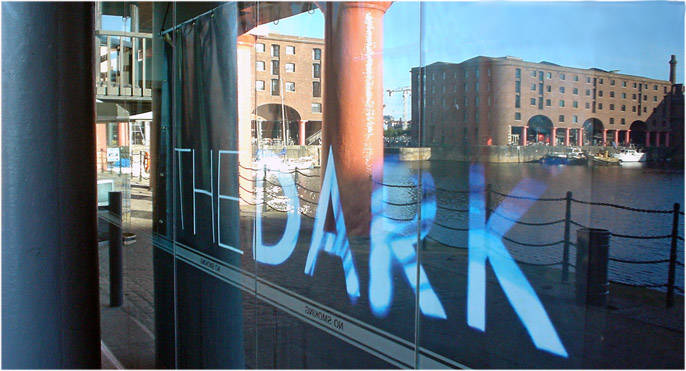 The DARK was available as an experience in the Albert Dock in Liverpool among many great UK locations.

With Heritage Lottery funding visitors could make their own 3D soundscape amongst other activities.

Amazing grace, how sweet the sound

I once was lost, but now am found

Was blind, but now I see

How can you, who have felt the oppressor's hard hand,

Who for freedom, all perils would brave,

How can you enjoy peace, while one foot of your land

Is disgraced by the toil of a slave!